Find: Windows 8 To Be Unveiled In September

Soon, but again long after apple.

Windows 8 To Be Unveiled In September

From what I know currently, this will not be the case. Latest news tidbits indicate that Microsoft is making great development progress. The Redmond company plans to create first Windows 8 beta builds in this month, which would mark a big milestone in development of the operating system.

Mike over at Windows 8 News noticed that the Build homepage was recently updated with a revealing slogin: In 1995, Windows changed the PC. BUILD will show you that Windows 8 changes everything.

The two sentences give us two important pieces of information. First, Microsoft is going to show the operating system during the conference in all of its glory, and second, the company is likely to stick with Windows 8 as the operating system’s name. 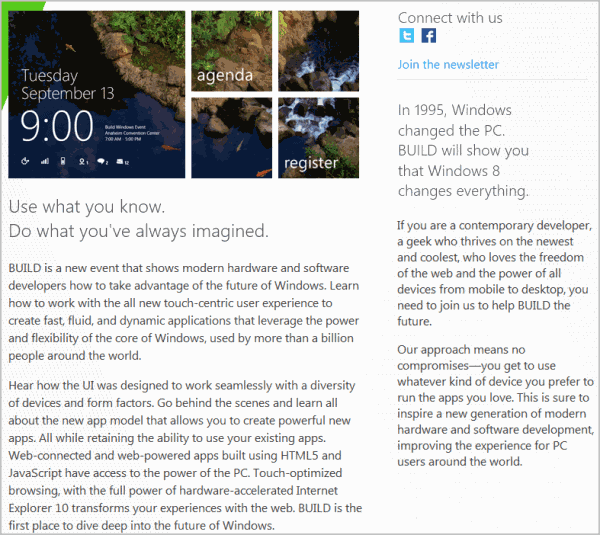 It takes between two and three months from there before the operating system becomes available on the retail market which would indicate a mid-2012 release of the operating system. Microsoft could obviously delay the release to match the October release date of Windows 7.

Here is a summary of the next development steps:

Got anything to add? Let me know in the comments.