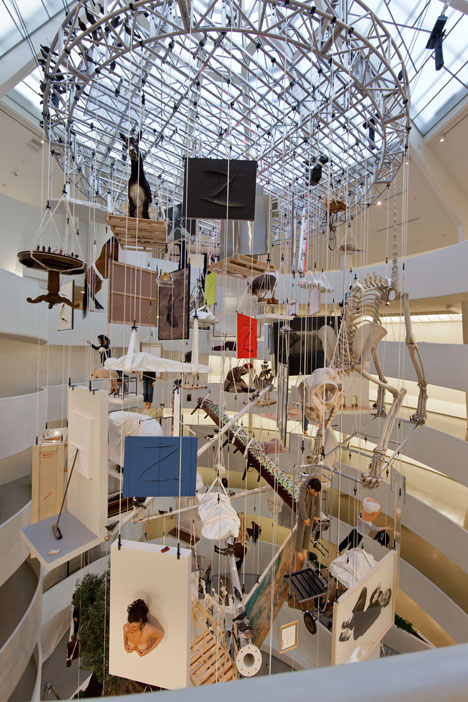 All, an unconventional retrospective of artist Maurizio Cattelan opened at the Guggenheim in New York on November 4, and with it, appropriately, the museum released its first mobile application to support the exhibition. Although a little late to the app game (with Google, galleries, and other museums paving the way), the Guggenheim Cattelan application succeeds in providing such wonderful supplementary and background information on the show, it perfectly bolsters the impact of its presentation.
Cattelan, an Italian sculptor, is known for his cheeky, subversive work, which ranges greatly in form and material. He is still alive, and only 51, but with All, he is choosing to retire from making art, marking the Guggenheim installation as the end of his career. As with much of his work, he chose to go out in rare form, undermining art world conventions. Within Frank Lloyd Wright's spiraling museum, nearly all (128 pieces) of Cattelan's body of work is displayed in the center void, each piece hanging from wires at varying heights. When shown individually, much of his sculpture is dependent on the surrounding environment that it inhabits. Here, every object has been removed from context, floating in mid-air, surrounded by unrelated works in time, category, or subject matter.
Works include a wax figure of Cattelan hanging by a Joseph Beuys felt suit jacket from a coatrack; a Picasso-as-mascot giant papier-machéd head worn by an actor for an exhibition at MoMA; several cutely curled-up, sleeping, taxidermied dogs; and a flattened Pinnochio figure, first shown stuck to the Guggenheim's floor in the rotunda in which it now hangs.
This cacophony of Cattelan's work requires some help to get through, and the Guggenheim has done well by pulling in the abilities of the Ipad and Android to bring it all together. Hosted by the cult filmmaker John Waters, it both sets and supports a similar tone to Cattelan's work—playful, subversive, and seemingly tossed together, yet obviously very considered. Waters introduces the app from a formal living room setting in a two-minute bit, and further in, ...
Newer Post Older Post Home
You've found NC State Computer Science's course on mobiles. You'll find all manner of course content here.
CSC 495/563
Where: eb1 1005
When: MoWe 1145-1p
Final: Fri 5/4 8-11a
Office Hours
Where: eb2 2280
When: Wed 3-330p