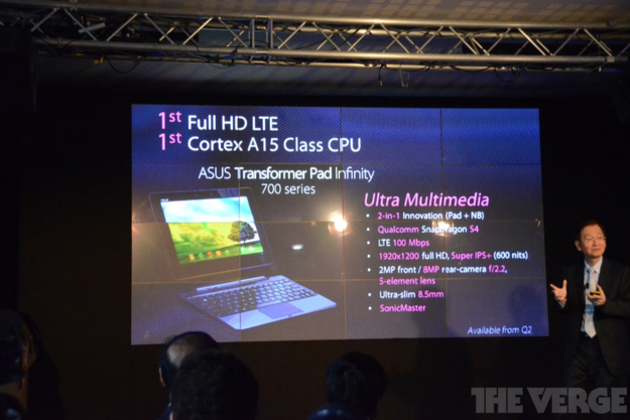 In addition to renaming their Transformer lineup — it's "Transformer Pad" now, not "eee Pad Transformer" — Asus has announced the new Transformer Pad Infinity 700 series. It's claiming to be the first full HD LTE tablet, and is powered by Qualcomm's Snapdragon S4 SoC, its first ARM Cortex A15 class CPU. The device retains the tablet/keyboard combo of previous generations, but has upped the display to an impressive 1920 x 1200 Super IPS panel. Alongside this, the Infinity 700 series pairs an 8-megapixel rear camera that can shoot at up to f/2.2 with a 2-megapixel webcam on the face of the device, packing all of this hardware into a case just 8.5mm thick.