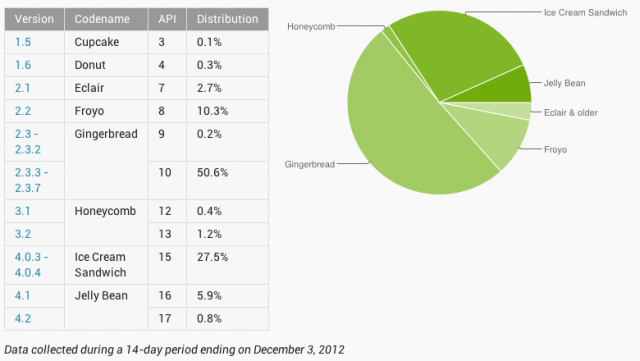 Google just released new Android platform distribution numbers for the end of November. While software fragmentation is still definitely a problem for smartphones and tablets running the open-source operating system, the numbers paint a picture of slow but continuous improvement: 34.2 percent of all users are now running Ice Cream Sandwich or newer. That's a considerable improvement from just six months ago when Ice Cream Sandwich accounted for a paltry seven percent of all Android devices. Now, at 6.8 percent, both versions of Jelly Bean have nearly overtaken that number by themselves.

Though Ice Cream Sandwich and Jelly Bean continue to grow, Gingerbread and older versions continue to account for the lion's share of Android usage. Versions 1.5 through 3.2 account for nearly two-thirds of the pie at 65.8 percent, and a good chunk of that is going to stick around for the long-term. It seems unlikely that most of the Froyo devices and a good number of the Gingerbread devices will see any sort of updates going forward, so we're going to be waiting for those phones to break or be replaced before they disappear.

These statistics are also the first to include Android 4.2, the new version of Jelly Bean released last month. It accounted for just 0.8 percent of the Android pie, a small but relatively impressive number given this version of Android is shipping pretty much exclusively on the new Nexus 4 handset, the Nexus 10 tablet, and new-and-upgraded Nexus 7 tablets. Most handset makers are still discussing (or not discussing, or canceling) Ice Cream Sandwich and Android 4.1 updates, and the Android 4.2 builds of third-party Android distributions like CyanogenMod are still in the very early stages. So it may be awhile before we see these numbers begin to spike in earnest.