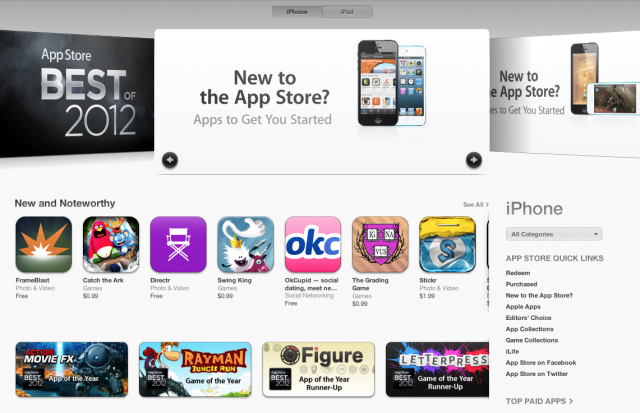 The iOS App Store has come a long way since its launch in 2008.

The mobile app world has come a long way since Steve Jobs extolled the virtues of Web apps in 2007. Apple announced early Monday that it had crossed the 40 billion mark for App Store downloads, with 20 billion of those downloads taking place in 2012 alone. In its announcement, Apple pointed out that the 40 billion number was derived from unique downloads that exclude re-downloads and updates—a common nit picked by critics.

Apple provided a number of other figures for context. The App Store now has more than 500 million active user accounts, and two billion app downloads took place during the month of December—undoubtedly after many new users unwrapped iPad minis and iPod touches. Apple says it has now paid out more than $7 billion to third-party developers for their apps, of which 775,000 are now available for the iPhone, iPad, and iPod touch in 155 countries.

The iOS App Store was first launched in early 2008, almost a year after the iPhone made its debut. It took a year for the App Store to push its first billion downloads, but it was only five months later when it crossed the two billion download mark in September 2009. The market has exploded since then for Apple and for competing platforms alike; earlier this month, Flurry analytics said there were 1.76 billion app downloads on iOS and Android during a single week in 2012, with an estimated 17.4 million devices being activated on Christmas Day. With numbers like that, it's no surprise that Apple's download numbers are multiplying—now if only app browsing and searching were even more intuitive (particularly when it comes to keywords), we could all download some more.