Find: IndyState of Android - Ice Cream Sandwich and Jelly Bean get a big bump from the holidays 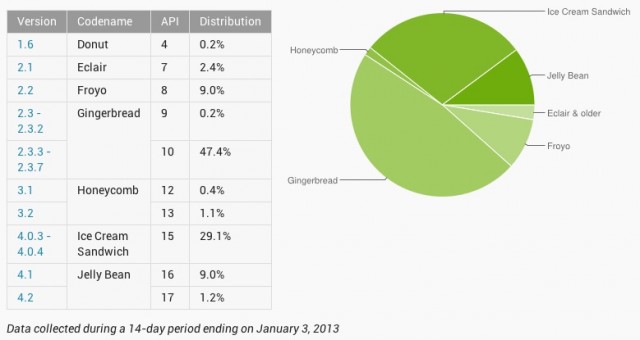 There's still a long road ahead, but Gingerbread is slowly loosening its grip on the Android ecosystem.
Android Developers

Android market share numbers for the end of December have just gone up on the Android Developers site, and the story is much the same as it was last month: Android 4.0, 4.1, and 4.2 continue to gain ground over older versions of the software. Version 2.3, codenamed Gingerbread, still powers more of the Android devices that accessed Google Play in the last two weeks of December than any other version, but its share has finally fallen below 50 percent (it now sits at 47.4 percent, down from 50.7 percent last month).

Now, 39.3 percent of all Android users are running Ice Cream Sandwich or newer, with 10.2 percent of those users running one of the two Jelly Bean versions. Some of this sizable uptick—up from 34.2 percent just last month—doubtlessly reflects the number of Android phones and tablets given as gifts over the holidays. Though Android 4.2 is still confined largely to Google's Nexus devices, it's rare to find a new device that isn't at least running Ice Cream Sandwich.

Some of the increase, especially Android 4.1's 3.1 percent jump, can also be attributed to Samsung's Galaxy S III, which began receiving its Android 4.1 updates in earnest in the middle of December. Samsung's flagship is one of the most popular Android handsets with consumers. The Verizon version of the handset likely accounts for a good deal of the upgraded phones given Verizon's status as the United States' largest wireless carrier.