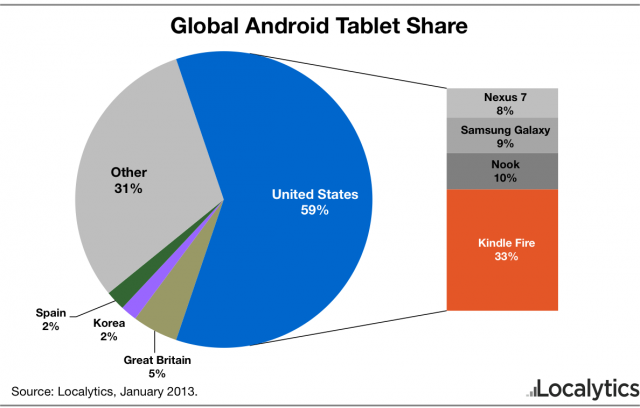 Localytics finds that even the Nook and Samsung Galaxy tablets are beating the Nexus 7.

The Kindle Fire overwhelmingly dominates the Android tablet scene, while Google’s own Nexus 7 finishes a distant fourth, according to data from app analytics company Localytics. While the company couldn’t offer raw data or comparative figures with Apple’s tablets, it does point out that the US has the majority share of Android tablets at 59 percent, and Great Britain has the next largest share at five percent.

Android tablet manufacturers continue to be cagey about sales figures, save a trickle here or there: David Chang, CFO of Asus, stated Google had sold around three million Nexus 7 units between the device’s launch in July and the end of October; Amazon did not trumpet sales of its Kindle Fire for the 2012 holiday season as it did in 2011, when around three million units sold in the month of December alone. By contrast, Apple sold 22.9 million iPads in the fourth quarter of 2012.

According to Localytics, the Kindle Fire element in the US constitutes a 33 percent share of the Android tablet market. The Kindle Fire is tailed by the Nook (Tablet) at 10 percent, the Samsung Galaxy series at nine percent, and the Nexus 7 at eight percent.