Cool, but when will it be more than a hobby?
---
Reviving the dead: How Android devices are keeping webOS alive 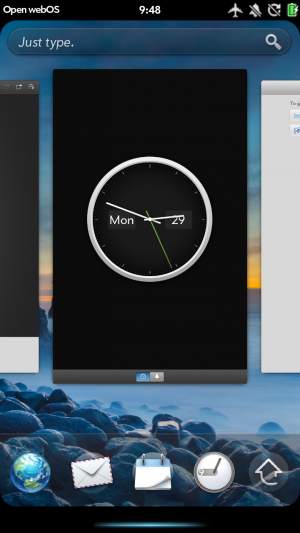 A screenshot of webOS running on Android.
Image courtesy of webOS Ports

There's an old saying that all good things must come to end, but that’s not always the case in the world of technology. A year after webOS was officially shut down, HP opened it up in hopes that third-party developers would continue development. And sure enough, the Open webOS project, established by HP to help further develop the operating system, is thriving—despite the prospect of having no new hardware.

In March 2012, a month after HP announced it was opening up webOS for development, a group of outside developers quietly began investigating the idea of porting webOS to other mobile devices. Many of these developers had been active participants in the webOS Internals group, a homebrew developer organization that formed in June 2009 (shortly after the "Konami code" was discovered, opening up the developer mode in Palm's webOS). So when HP decided webOS was no longer commercially viable, the team immediately wondered if webOS would eventually be set free for developers. “It did not appear that [HP was] going to be creating any new devices,” Tom King, project leader of the webOS Ports group, told Ars. “I think we all liked webOS, what it was, and what it potentially could be in its open source life. We realized that it was a minority OS and, at the time, there really wasn't any other good open source option available to us. Tizen and Meego were having its share of problems finding foothold anywhere.”

The webOS Internals team began working with HP to help release the Community Edition of webOS for the TouchPad. The objective of the Community Edition was to get the "community" code out in the wild, giving developers a chance to familiarize themselves with how the TouchPad hardware worked in conjunction with the webOS software. The idea was the practice time they had with this version would enable them to do more with Open webOS once it was officially released. But this also gave King and the team an opportunity to...