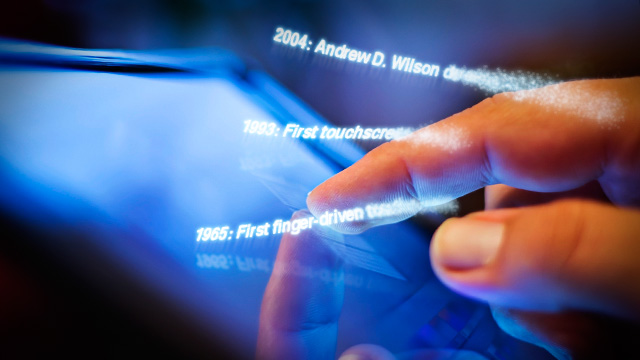 It's hard to believe that just a few decades ago, touchscreen technology could only be found in science fiction books and film. These days, it's almost unfathomable how we once got through our daily tasks without a trusty tablet or smartphone nearby, but it doesn't stop there. Touchscreens really are everywhere. Homes, cars, restaurants, stores, planes, wherever—they fill our lives in spaces public and private.

It took generations and several major technological advancements for touchscreens to achieve this kind of presence. Although the underlying technology behind touchscreens can be traced back to the 1940s, there's plenty of evidence that suggests touchscreens weren't feasible until at least 1965. Popular science fiction television shows like Star Trek didn't even refer to the technology until Star Trek: The Next Generation debuted in 1987, almost two decades after touchscreen technology was even deemed possible. But their inclusion in the series paralleled the advancements in the technology world, and by the late 1980s, touchscreens finally appeared to be realistic enough that consumers could actually employ the technology into their own homes.


This article is the first of a three-part series on touchscreen technology's journey to fact from fiction. The first three decades of touch are important to reflect upon in order to really appreciate the multitouch technology we're so used to having today. Today, we'll look at when these technologies first arose and who introduced them, plus we'll discuss several other pioneers who played a big role in advancing touch. Future entries in this series will study how the changes in touch displays led to essential devices for our lives today and where the technology might take us in the future. But first, let's put finger to screen and travel to the 1960s.