Find: This is cool - Qualcomm shows off its Mirasol display 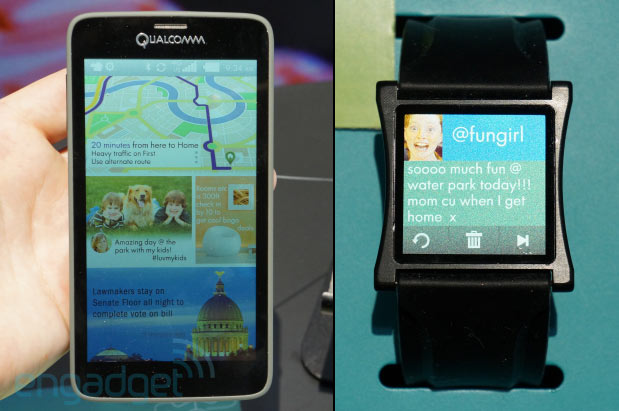 There have been rumors of Qualcomm's MEMS-based Mirasol display for years now. Once advertised as the "future" of e-reader displays, the company is now showcasing its proofs-of-concept. Engadget snagged a preview of both a 5.2-inch panel display with a 2,560 x 1,440 resolution and 577 ppi embedded into the chassis of a common smartphone body, as well as 1.5-inch panel on what looks like a smartwatch. A representative at SID Display Week, where the prototype was being shown, told the site that the displays were merely mock-ups, but that the screen will likely show up in other third-party devices.

The Mirasol display is touted for its energy-efficiency. It offers a six-times-over power advantage compared to both LCD and OLED displays, which means it would be the kind of display that a smartphone would make great use of. It's made with a micro-electro-mechanical system (MEMS) based on Interferometric Modulation (IMOD) technology, which Qualcomm says "offer[s] users a convergent display experience with paper-like readability in almost any ambient condition, while consuming significantly less power than any other display available today."

Ars Technica alumni Jon Stokes explained why the Mirasol display is so energy efficient in 2009: