Find: Attack of the camera-phones: Hands-on with the Samsung Galaxy NX and S 4 Zoom

About time! Camera software is painful. And it's still too hard to get pictures off them.
---
// published on Ars Technica // visit site 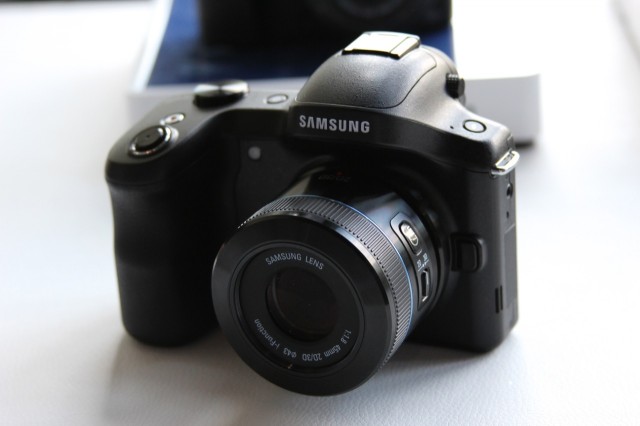 At its event in London earlier today, Samsung took the time to highlight a few of its upcoming phones and tablets. The most interesting of the Windows tablets, the Ativ Tab Q, wasn't available after the event for journalists to try out. However, we were able to spend some brief hands-on time with both the Samsung Galaxy NX and the Galaxy S 4 Zoom, two of the company's latest attempts to marry its Android devices to more robust cameras than the ones that typically come with smartphones. It's a camera, but it's also an Android device through and through.
Andrew Cunningham The Galaxy NX has a nice rubberized handle and the requisite camera loops (one on each side) to keep you from dropping it.
Andrew Cunningham

The Galaxy NX is something of a successor to last year's Galaxy Camera, but it can also be seen as an Android-equipped extension of Samsung's existing NX camera series. The Galaxy NX looks like nothing so much as a Samsung NX 20 with most of the physical controls moved to the 4.8-inch, 720p IPS touchscreen (that's right, no AMOLED here). It also shares its 20.3 megapixel APS-C sensor and mirrorless-ness with the NX 20, though its shutter speed is slightly slower (a max of 1/6000th of a second, down from 1/8000th of a second in the Galaxy NX).

The camera's body is closer to DSLR-sized than point-and-shoot sized, but a grippy rubberized handle and loops for straps should make it easy enough to hold on to. Compared to the body of my Canon T3i, it's a bit slimmer but in the same ballpark, and if you've held a DSLR before you should be familiar with the Galaxy NX's size and heft. As we mentioned, all of the camera's manual settings can be accessed by navigating through the UI on the camera's touchscreen. While this sort of navigation could potentially be more friendly to novices, photographers used to adjusting settings on-the-fly with physical camera controls may find having to make ISO, shutter speed, and other adjustments to be more difficult without them.