Adding API access to the camera would be a very good idea. A natural way for google to break out of androids camera doldrums. Potential applications could be very exciting.
*** 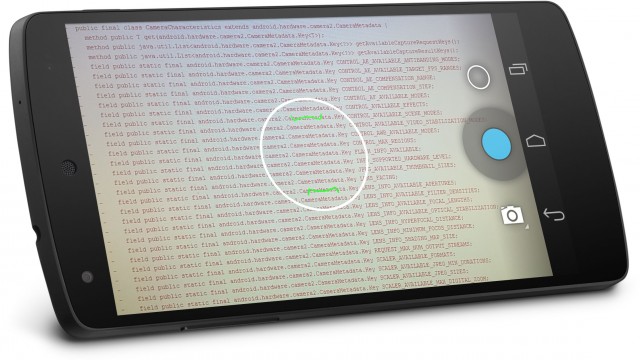 The Nexus 5 camera was a huge disappointment, especially after comments from high-ranking Googler Vic Gundotra stating that "we are committed to making Nexus phones insanely great cameras. Just you wait and see."

That was nine months ago. We waited and saw, and what showed up on the Nexus 5 wasn't very good. There may be an explanation for this, though. According to commits in the public Android source code, which were first spotted by Josh Brown on Google+, Google is working on a new camera API for Android. Work on the new API started in December 2012, which would make it seem targeted for KitKat, but about a month before the new OS's release, the API was pulled from Android's framework code. The commit that removed the API from the release Android code is here, with the comment saying:

This commit was pushed on October 11, about a month before the release of KitKat. A month before release was probably "feature freeze" time, where work on new features stops and everyone focuses on fixing bugs in time for release. The camera revamp didn't make it and was replaced with the original camera API.