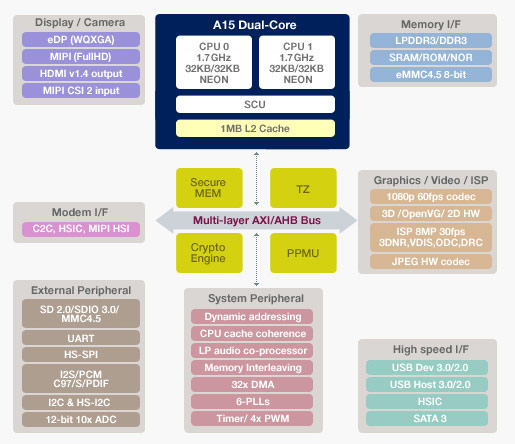 Samsung has just released details about its new Exynos 5 5250 SoC for mobile devices. This dual-core, 1.7GHz chip is the first one on the market to feature the new Cortex A15 CPU architecture from ARM, which will provide substantially improved performance over the Cortex A9-based chips used in most of today's smartphones and tablets.

The chip also includes ARM's new Mali-T604 GPU designed to power Retina-class displays and support high-performance connectivity options like SATA and USB 3.0. These improvements make it a substantial upgrade over current-generation products like NVIDIA's Tegra 3 or Samsung's own Exynos 4. We'll look at different aspects of the chip to see not just how the Exynos 5 and other Cortex A15 SoCs will benefit current tablets, but also how those improvements could lead to more viable laptop replacements.

Most ARM processors in today's devices, including the NVIDIA Tegra 3 in the Nexus 7 tablet and all variations of the Apple A5 used in newer iPads and iPhones, use Cortex A9-based designs. The A9 excels in power usage, but is more limited when it comes to performance.